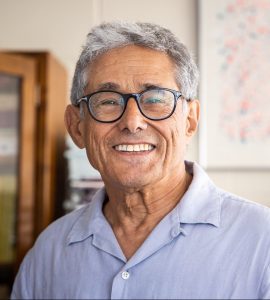 It is a great honour for the Canadian Applied and Industrial Mathematical Society to present the Research Prize to Dr. Leon Glass from McGill University. Dr. Leon Glass, a fellow of the Royal Society of Canada, has made seminal contributions to research, education and community leadership.

His early research on dynamic genetic networks in the 1970’s and 80’s has laid the foundation of major developments in systems biology. Through L. Glass’ work, tools from dynamical system theory became available for the analysis of large genetic networks.

In collaboration with M Mackey, L. Glass studied delayed feedback control in physiological systems. They found, for the first time, that chaotic dynamics arise naturally in such  feedback systems. Their paper in Science from 1977 has more than 4000 citations and their model is now known as the Mackey-Glass
equation.

A special interest of L. Glass is the analysis and detection of cardiac arrhythmias. He and his colleagues could show the existence of chaotic dynamics in embryonic chicken heart cells, which was the first demonstration of chaotic behaviour in a biological system. J. Gleick wrote in his popular science book “Chaos” about Glass that this was “one of the most talked about lines of research in the whole short history of nonlinear dynamics” (1987). L. Glass’ research on cardiac arrhythmias culminated in patents for a detection software of cardiac arrhythmias.