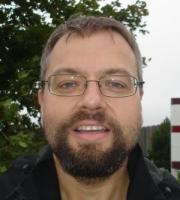 Ronald received a B.Sc.(Hons) in Applied Mathematics from Memorial University of Newfoundland and MSc/PhD from Simon Fraser University. After completing an NSERC postdoc at the University of Waterloo, jointly in the School of Computer Science and Department of Applied Mathematics, he began his first academic position at Acadia University. He held this position for five years before coming home to Memorial as an associate professor in the fall of 2009. His research involves various aspects of numerical analysis and scientific computing. His interests include numerical methods for partial differential equations (moving mesh methods, domain decomposition, and parallel methods in time), numerical linear algebra (including investigations of classes of monotone matrices) and optimization (evolutionary inspired algorithms like particle swarm optimization). Recently he has spent considerable time working on large scale applications including the tidal energy project in the Bay of Fundy, and the optimization of renewable and non-renewable energy technologies in the Newfoundland and Labrador offshore, and as a founding member of the Computational Applied Geophysics Group at Memorial. Ronald was a member of the CAIMS*SCMAI 2010 Scientific Program Committee and a co-organzer at the upcoming First Canadian Symposium in Numerical Analysis and Scientific Computing (CSNASC) at CAIMS*SCMAI 2013 in Quebec.