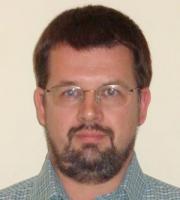 Tony Humphries received his BA from the University of Cambridge in 1989 and completed a PhD in mathematics at the University of Bath in 1994. After that he was a postdoctoral research assistant at Bristol University and a Lecturer and Senior Lecturer at the University of Sussex, in England. He came to Canada in 2001, firstly as a long term visitor at the Fields Institute as part of Thematic Program on Numerical and Computational Challenges in Science and Engineering, before joining the Department of Mathematics and Statistics at McGill University as an Associate Professor the following year. His research interests are in numerical analysis and dynamical systems, and in particular the interface of the two, recently focusing on state-dependent retarded and advanced-delay differential-difference equations. He has served as Deputy Director (Scientific Programs) of the CRM in Montreal, and director of the Applied Mathematics Laboratory of the CRM, as well as chairing the Organizing Committee of the Thematic Semester on Applied Dynamical Systems at the CRM in 2007. He has been a member at large of the CAIMS board since 2010.